This page does not support Internet Explorer browser.

Network operators and utility companies receive enquiries about planned developments or other measures from cities, municipalities, architects, construction companies or other energy suppliers. As a responsible body for public interests, the network operator examines and processes a number of plans in regards to their effects on existing and planned networks (such as road constructions, developments and extensions as well as pipeline construction) during the circulation procedure. This is done on different organisational levels. All divisions such as waste water and public transport are required to release a formal response to these measures.

The enquiries are managed by a central organisation of the network operator and are distributed to individual divisions using the module Lovion FLOAT. Afterwards, a complete response can be sent via Lovion FLOAT. The coordination in Lovion FLOAT is managed in a central location where deadlines for individual divisions can be monitored. As a result, this reduces numerous additional enquiries and prevents double work from being done. Thus, the circulation process is much quicker and more efficient. 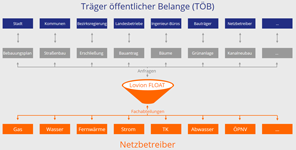 In the step "reply", the enquiry is examined and processed by special organisational units within a responsible division and a formal response is released. Whilst the enquiry is being processed, the central coordinator monitors specific deadlines.

If all special planners have given a formal response, these are combined into a single response and sent to the enquirer.

After an enquiry for a planned measure arrives in the post, it is usually forwarded to the responsible body of public interests, which is also the central coordinator. The enquiry is recorded digitally.

The plan relating to the enquiry is made available for operation. The affected area is outlined with a polygon in the map and marked with an identification text. The colour of the polygon indicates the current status of the process.

While the action is being circulated to the organisational divisions, the central coordinator can monitor the status and make sure that the deadline is upheld.

Subsequently, the specialist planner releases a written statement, responding to the enquiry. The statement is attached as a document using a serial e-mail function.

The reply phase is completed when the specialist planner updates their reply status. The status may vary depending on the division. The reply is sent to the cetral coordinator via e-mail.

Once all involved organistaional divisions have released a written statement as a response, they are summarized in one formal response. The collective drawing plan is printed out and attached to the formal response.

The written response and the drawing plan is attached to the development proposal. Affected organisational division are notified about having received their response. This process step is completed once the processing status is updated.

After the response has been sent to the original enquirer, the enquirer has the opportunity to reply with a new response, which is sent to the central coordinator. The enquirer's reaction can result in further responses being required, thus starting a new circulation procedure for the same proposed development. The Development proposal is updated by the central coordinator and the additional processing steps can commence.